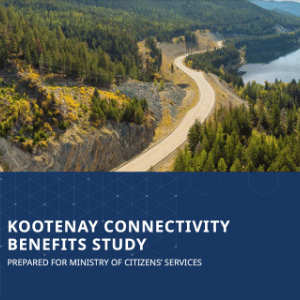 The Kootenay Connectivity Benefits Study, released by BC Stats, finds high-speed internet connectivity expansions in rural, remote and Indigenous communities positively impacts both local and provincial economies in the short and long term.

BC Stats conducted a study of the Kootenay Economic Region to examine the impacts of new high-speed internet services. The area was chosen for this initial study due to investments in connectivity in the area, and its rural location with lower population density and fewer urban centres making it representative of rural B.C.

Since 2020, the Province has invested $19.4 million in connectivity funding in the Kootenay Economic Region through the Connecting British Columbia Program, funding 24 projects to connect more than 10,000 households in the area. This investment leveraged a $105-million investment in connectivity by the public and private sector. The study found that connectivity improvements will generate a local and provincial total of $281 million in short- and long-term economic benefits, 14 times the Province’s original investment.

* Short-term benefits as a result of construction and building of infrastructure:
* For the Kootenay Economic Region: $56.2-million increase in gross domestic product (GDP), and 429 new jobs.

* For British Columbia (including the Kootenay region): $67-million increase in GDP, and 500 jobs.

While the study focuses on one region and one set of investments, it serves as a model for understanding the possible impact connectivity investments can have on an economic region and the province as a whole.