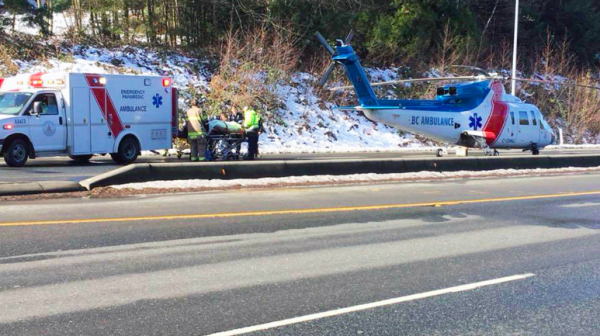 B.C. Auditor General Carol Bellringer released a report this week on the BC Emergency Health Service, confirming what many people in rural B.C. already know: Service levels and response times could use improvement.

The report found that access to emergency health services varies depending on where you live, with fewer or no paramedics trained to provide advanced care in rural and remote communities.

“We found that BCEHS sometimes takes longer than it would like to, to reach patients where time matters,” the report states. “This increases the risk that some patients do not receive the care they need, when they need it.”

The report recommends that BCEHS evaluate its advanced care coverage across the province to determine whether it is sufficiently meeting the needs of patients.

This problem has been known for quite some time. A 2017 report from the BC Forest Safety Ombudsman Roger Harris pointed out serious gaps in the provision of emergency medical transportation services to people living and working in rural parts of the province.

“The availability and level of emergency medical services in B.C. is distinctly split down urban and rural lines,” said Harris in the report.

The auditor general’s report points out several reasons that patients in rural and remote areas can experience lower levels of service than urban patients. Some of these issues are not easily corrected.

But critics question whether the targets themselves are appropriate. Without provincial or national standards, BCEHS sets its own standards for patient care.

After seeing the report, Hans Dysarz, the executive director of the emergency medical care advocacy group BC HEROS (BC Helicopter Emergency Rescue Operations Society), said he wishes the report had gone further in pushing for change in the ambulance service.

“I am afraid nothing is going to change for rural B.C.,” said Dysarz.

The longer distance to appropriate hospital care also plays a role in the urban-rural divide.

All of the Level 1 trauma centres equipped to care for patients experiencing major trauma are in the Lower Mainland.

That leaves a vast swath of B.C. residents with a very long way to travel to reach the help they need.

The third issue mentioned in the report related to lower levels of service in rural areas is that advanced care paramedics are not stationed in rural and remote communities.

BCEHS says it stations them in areas where demand for emergency health services is greatest.

The report confirms patients in communities without advanced care paramedics have fewer medical interventions available to them at the scene of an emergency and on the way to the hospital.

“This puts some patients at greater risk,” says the report.

According to BCEHS data for 2017, advanced or critical care paramedics were only dispatched to 17 per cent of rural and remote pre-hospital patients identified by BCEHS call-takers as requiring the highest level of care available, and the median response time for those calls was 27 minutes.

The numbers are quite different for urban centres where advanced or critical care paramedics were dispatched to 74 per cent of calls identified as requiring the highest level of care. The median response time to the urban calls was 11 minutes.

To compensate for the lack of advanced paramedic staffing, paramedics in the field have 24/7 access to guidance from advanced care paramedics through the paramedic specialist program, as well as from physicians through dispatch.

But, emergency medical responders (EMRs) and primary care paramedics (PCPs) can only perform the tasks they are licensed to perform.

“However, it [BCEHS] has not evaluated its advanced care coverage to determine whether it is sufficient to meet the needs of patients requiring higher-level care across the province,” said the report.

“In many ways, the report underscores the critical importance of the BCEHS Action Plan, our three-year strategy to improve services,” she said.

“Initiatives in our action plan are already beginning to address a number of issues raised, including improved response times for life-threatening and urgent calls.”

Lupini stated the organization is committed to following up on the report’s recommendations.

Posted in Health Care, News and tagged ambulance, emergency services, rural healthcare
← Between a Lake and a High PlaceRural Healthcare in BC — Where Are We & Where Are We Going? →
BC Rural Centre