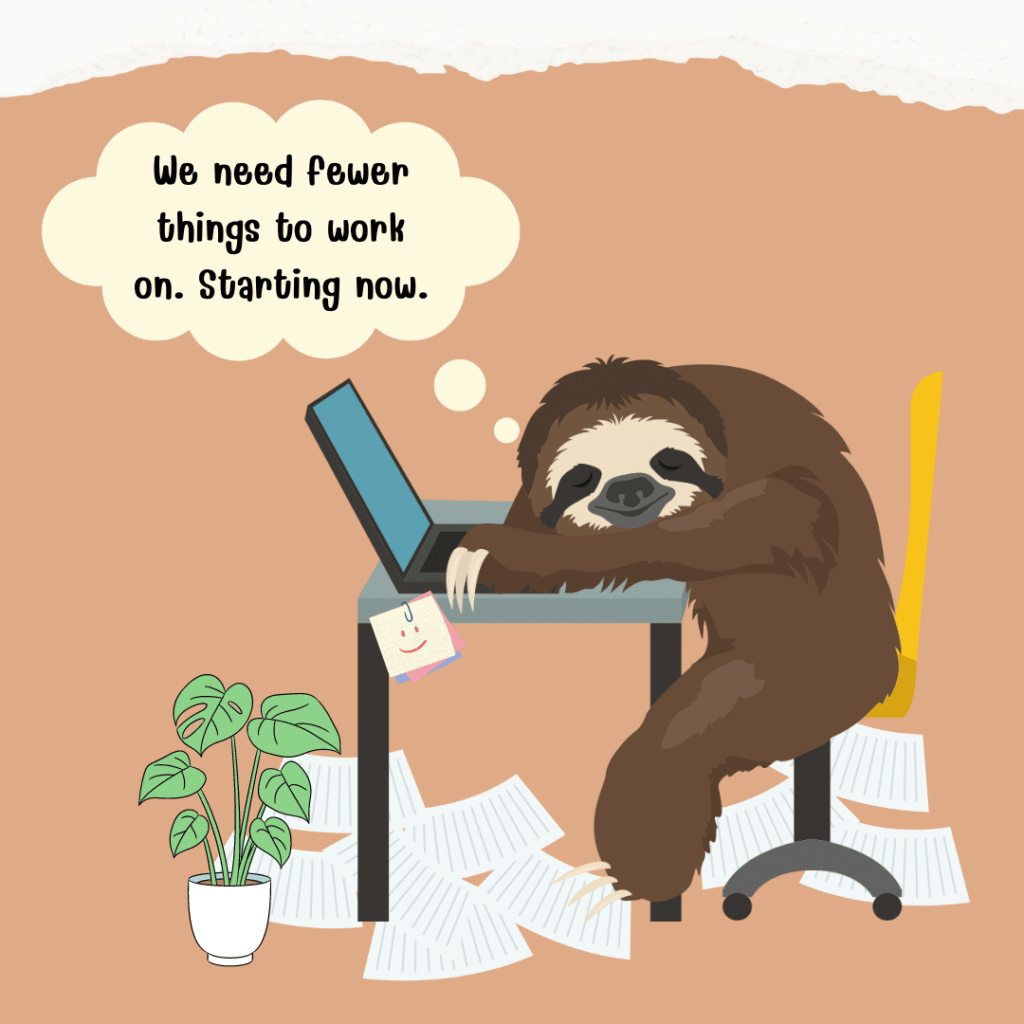 For knowledge workers, the biggest sign that the status quo is broken is the rise in self-reported burnout. This past summer, McKinsey and Lean In collaborated on a survey of more than sixty-five thousand North American employees, primarily from knowledge-sector jobs. They found a significant increase in those describing themselves as feeling burnt out “often” or “almost always,” an increase that was particularly sharp for women. A recent Gallup poll shows that American workers are now among some of the most stressed in the world. Jim Harter, Gallup’s chief workplace scientist, pointed out how these stress measures rose alongside metrics that show an increase in employee efforts. “The intersection of work and life needs some work,” he said.

Reducing the total number of hours that office workers toil each week seems an obvious solution to the problem of burnout caused by overwork. Indeed, it’s a solution that’s been offered before. The journalist Carl Honoré, in his 2004 book, “In Praise of Slowness,” depicts the rise of various “slow” movements around the world. The phenomenon started in the nineteen-eighties with Slow Food, when a group of local activists reacted to the planned opening of a McDonald’s near the Spanish Steps in Rome. A subsequent manifesto rejected the “fast life,” personified by fast food, and called for a revolution in slowing down that would begin in the kitchen. “Let us rediscover the rich varieties and aromas of local cuisine,” the manifesto declared. As Honoré documents, this pushback against speed soon moved beyond food. He describes similar movements focussed on a variety of topics, from Slow Cities to Slow Medicine and Slow Parenting. Not surprisingly, Honoré dedicates an entire chapter to the part of our lives where too much speed is arguably the most overwhelming: our jobs. Presaging the current moment, Honoré notes efforts from the nineties and early two-thousands to reduce the length of the standard workweek, either by government declaration, as happened in France in 1998, or by more enlightened corporate policies. “Everywhere, and especially in the long-hours economies, polls show a yearning to spend less time on the job,” Honoré writes. He gives the emergent movement an obvious name: Slow Work.

In the years immediately following the publication of “In Praise of Slowness,” the Slow Work movement struggled in the U.S. There seems to be an intrinsic mismatch between American hustle culture and a call to work less. To quote a representative critique, which appeared in a talent-management journal: “Your rivals are salivating over your 4-day workweek. Remember, there’s always someone willing to work harder than you.” Economic conditions in the early years of the movement didn’t help, either. Few people seemed interested in reducing hours when the two-thousands economic boom was making many rich, and few could afford to consider slowness amid the wreckage of the subsequent crash. Jumping forward, however, our current situation may prove more receptive to these ideas. It’s possible that the severe disruption caused by the coronavirus pandemic might revitalize a call for moderation, with the sudden, disastrous increase in burnout among office workers providing the final push that knowledge workers need to demand more time away from their desks. Five years ago, the Thirty-Two-Hour Workweek Act would have been dismissed as progressive hokum. Today, it’s endorsed by nearly a hundred members of Congress. But there remains a problem with this ascendency of Slow Work. When it comes to computer-screen-and-e-mail workers, who seem particularly afflicted by burnout at the moment, I’m not convinced that calls to reduce the length of the workweek will really cure what ails them.

As I’ve previously written, the major distinction between the typical worker in 1938, when the Fair Labor Standards Act standardized the American workweek, and the typical burnt-out office worker of today is autonomy. If you labored as a Depression-era clerk, you had little control over what you did during your shift: you clocked in, you executed (or not) your assigned tasks, you clocked out. In a twenty-first-century office role, the situation is reversed. You now have almost total control of how you fill each minute. No one is asking you to clock in and clock out. They instead demand, in some ill-defined yet urgent sense, that you’re responsive and get things done. This autonomy has allowed modern knowledge work to evolve haphazardly toward an increasingly unsustainable configuration. The issue in this evolution is not how many hours you’re now asked to work but the volume of work you’re assigned at any one time.

By volume, I’m referring to the total number of obligations that you’re committed to complete—from answering a minor question to finishing a major project. As this volume increases past a certain threshold, the weight of these efforts can become unbearably stressful. Humans are uniquely adept at crafting long-term strategic plans for accomplishing objectives. Our facility with planning, however, falters when confronting an in-box stuffed with hundreds of messages and a task list that fills multiple pages. When there’s too much for us to imagine actually completing, we short-circuit our executive functioning mechanisms, resulting in a feeling of anxious unease.

These psychological struggles aren’t the only cost to having too much work to do. Most professional commitments bring with them the need to coördinate with other people. If you agree to create a marketing plan for a new product, in addition to actually writing the plan, you probably need several meetings and a small avalanche of e-mails to pull together the necessary information and keep the project on track. In isolation, this overhead is reasonable. When you’re tackling too many such projects concurrently, however, the combined impact of all of the corresponding meetings and messages can take over most of your schedule, creating an overhead spiral of sorts in which you spend significantly more time talking about work than actually getting it done—a form of wheel-spinning freneticism that amplifies frustration and, ultimately, leads to burnout. During the early months of the pandemic, when the disruption of the moment generated a sudden increase in work volumes, I began to hear from many office workers who were facing eight straight hours of Zoom conferences. This collaboration reductio ad absurdum should rightfully be mocked, but similar situations are unavoidable in work environments where we keep piling tasks atop one another without consideration or constraint. In this context, Slow Work-style efforts to simply reduce official work hours might actually make matters worse, as they do little to mitigate the stress of overload. What we need is a movement to reduce the volume of work that is assigned to us in the first place—a movement I call Slow Productivity.

The central goal of Slow Productivity is to keep an individual worker’s volume at a sustainable level. A natural fear is that by reducing the amount of work each employee tackles at any given time, it might reduce the total amount of work an organization is able to complete, making it less competitive. This fear is unfounded. As argued, when an individual’s work volume increases, so does the accompanying overhead and stress, reducing both the time remaining to actually execute the tasks and the quality of the results. If you instead enable the individual to work more sequentially, focussing on a small number of things at a time, waiting until she is done before bringing on new obligations, the rate at which she completes tasks might actually increase.

The bigger challenge of Slow Productivity is that it requires systems to manage work that’s not yet assigned. If you’re a boss, and an important task pops to mind—“We need to update our Web site with new client testimonials!”—you can no longer simply e-mail the request to one of your underlings and move on with your day. Slow Productivity would require you to log this item into a system where it can be properly prioritized and ultimately assigned when the right person has the needed time available. If it’s a significant project, perhaps it can be stored on a kanban-style board that tracks both pending and ongoing work. When someone finishes an objective, a collective decision can be made about what to assign her next, and the board is then updated for all to see. Smaller administrative tasks might be better served by a more direct system. Imagine everyone on your team puts aside one hour a day for completing small tasks and answering quick questions. Further imagine that they each post a shared document containing a sign-up sheet for a day’s block, including only a limited number of slots. If you want someone on your team to, say, give you his availability for an upcoming client visit, you must find a free slot in which to record this request. He’ll then see it and give you an answer during that day’s administrative block—freeing him from the burden of having to manage all of these obligations in a single, overwhelming pile of unstructured urgency. All of this, of course, would be a pain. It would be so much easier in the moment to simply e-mail your colleague to assign him a project or ask him a quick question. But in the world of work what’s easiest is rarely what’s most effective. The downsides of haphazardly inflating work volumes are sufficiently severe that we should be willing to entertain elaborate solutions, even if they are, at first, complicated and annoying to implement.

Returning to Mark Takano’s Thirty-Two-Hour Workweek Act, it’s important to emphasize that knowledge workers are just one group among many that Takano has mentioned when describing his motivation. There are several economic sectors for which Slow Work-style solutions, such as a reduced standardized workweek, might prove effective, with the plight of exhausted health-care professionals and teachers standing out as particularly acute examples where immediate relief is needed. The issue I raise here is not whether a shorter workweek is an entirely bad idea but whether it will sufficiently solve the narrow-but-urgent problem of rising burnout among office workers. I don’t think it will. The autonomy that defines the professional lives of those who toil in front of computer screens has led us into a trap of excessive work volume. We cannot escape this trap by expanding the weekend. We must ultimately brace ourselves for the larger challenge of slowing down the pace of the workday itself.

This article was originally posted on January 3, 2022 in The New Yorker and written by: Cal Newport