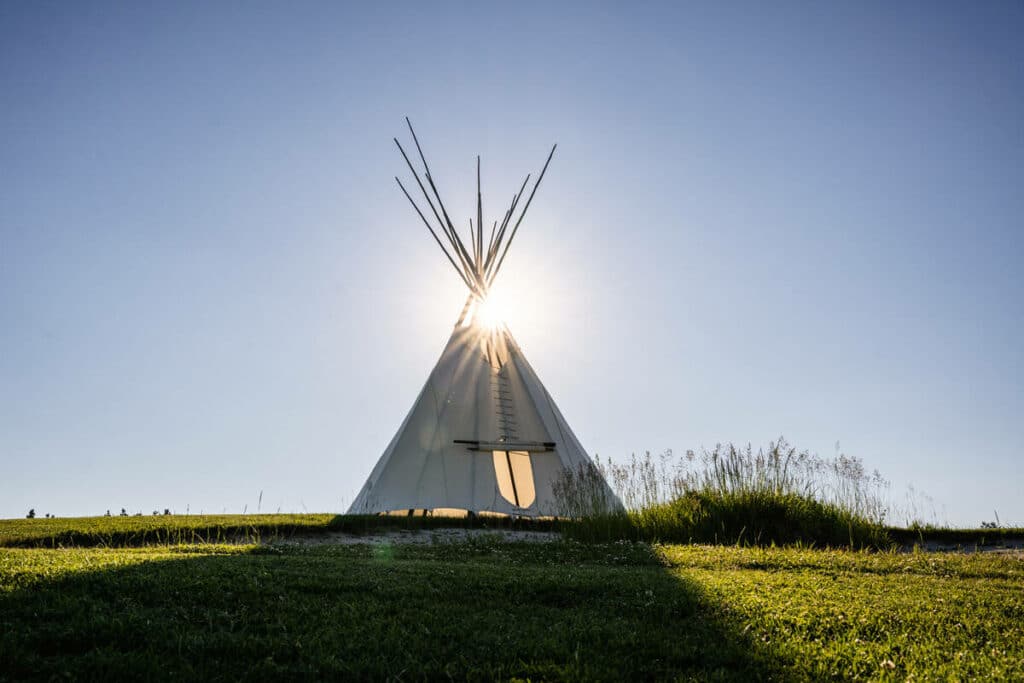 After Pope Francis issued his historic apology for the horrors of residential schools on Tuesday, a voice could be heard in the crowd calling for him to repudiate the Doctrine of Discovery.

That voice was Judy Wilson, chief of Neskonlith Indian Band and the secretary-treasurer of the Union of B.C. Indian Chiefs. The doctrine she was referring to is a more than 500-year-old pronouncement from the Catholic Church that gave colonial powers free rein to invade any land not yet “discovered” by Christians.

The Doctrine of Discovery originated in the form of papal bulls, edicts issued by the Catholic Church in the 15th century to empower Portugal and Spain to colonize, plunder and enslave West Africa and the Americas. Other colonial powers soon followed suit, and the doctrine became the basis for slavery and European claims over Indigenous land and people.

Wilson says we’re still feeling the effects of that doctrine today, in the form of residential school trauma, the Indian Act, the Sixties Scoop, the reserve system, the clean water crisis in Indigenous communities and more.

She is one of many Indigenous advocates calling on the Pope to use his visit to renounce the doctrine. Here is part of her conversation with As It Happens guest host Helen Mann.

Chief Wilson, the Pope has made it clear that this visit is all about seeking forgiveness and reconciliation. Having seen his apology at Mascwakis, [Atla., on Monday] and the mass [Tuesday] in Edmonton, do you feel like he is succeeding?

I still haven’t heard anything about repudiating the Doctrine of Discovery, which is where a lot of the genocidal legislation [and] policy — you know, the Indian Act, the residential schools, the creation of the reserves — all stem from.

I don’t think many Canadians perhaps have understood the importance of that doctrine and why it is so fundamental to you to see it revoked. Can you just explain how that kind of fits into the history of colonialism that the church helped perpetuate?

The Doctrine of Discovery all occurred, you know, when Spain and Portugal, they had those papal bulls that gave those countries [the right] to conquer.

Then England followed suit after them, and they came over to our countries and said that the land was vacant and under terra nullius and that, you know, our people were savages, so that our land and resources and our people were open to do [with] as they wish — which was erasure, assimilation and eradication.

Fast-track that to today under the genocidal legislation the colonial governments came up with — you know, the Indian Act and all the different legislation that dispossessed us from our lands, our waters and our language and our culture.

Even if [we have] the bare minimum of apology over residential schools … it doesn’t go far enough of changing those legislation and policies, and changing the paradigm between state, government and our people and the Crown, and all the parties involved. So we have to have that to be able to have the truth before reconciliation, so we can get on with the work.

I’m a chief, but we don’t hold title to our reserve lands. I’m still a ward of the government…. So we want our land back so that we can provide for ourselves, we can stand up our own law…. because that’s so important to be able to take care of ourselves the way we did. And right now, we’re just managing in poverty from programs and services, and stuck on small reservations.

That’s not reconciliation. We need to find a better path through that. And every nation will be different according to … where the nation is on these issues. But the repudiation of [the] Doctrine of Discovery is so fundamental to that.

Watch: President of the Union of B.C. Indian Chiefs on the Doctrine of Discovery:

Canada Tonight’s Ginella Massa speaks to the former Vice President of the Union of B.C. Indian Chiefs, Bob Chamberlin, about the Pope’s omission of the Doctrine of Discovery from his apology to Indigenous communities.

People have noted that the Pope’s language was very careful in issuing this apology and asking for forgiveness. He did not apologize for the church as a whole. Why do you think he has held back from doing that and instead focused on the actions of certain members of the church?

Yeah, I heard that, too. I was right there and I heard it directly myself that, you know, he was saying again in different words, “those Christians,” “those people,” “those that did harm to Indigenous people.” And he wasn’t acknowledging and being accountable for the church’s role in running those residential school institutions.

I heard he couldn’t even say “sexual abuses.” And there are many sexual abuses that happened to our children, and many died at the hands of those church-run institutions.

He could have gave a stronger mandate to the [Canadian] bishops and the archbishops and to the localized groups to be able to return many of our cultural items, our artifacts, our belongings that were wrongfully taken from us. And also saying we need to open our archives and our data to be able to provide that information back to the nations that, rightfully so, should be able to have them, as the nations are putting together the information regarding those residential schools and what happened to their children.

This has just been the second full day of the Pope’s visit. There’s some days to come. Do you hold out any hope that something might happen in the coming days in terms of those records the church holds, the artifacts, a more fulsome apology or the Doctrine of Discovery that would make the visit feel more worthwhile to you?

There was an important film I saw the other day. It was The Doctrine of Recovery that talked about the Doctrine of Discovery and the repudiation by [three] beautiful tribal women across North America. And it has an important message … so I’m hoping people will see that so that they can get the information, because there’s really not a lot of information out there when people are struggling to understand these issues.

For the next few days I’m going to continue to do what I need to do. And while [I was] … saying out loud, “Repudiate the Doctrine of Discovery and renounce the papal bulls and genocide,” [I saw] a person here that did that, too.

And I just smiled because I thought, you know, some people are listening. Some people are getting it right. So I was happy to see that. So that kind of got me kind of hopeful today.

Support is available for anyone affected by their experience at residential schools or by the latest reports.

A national Indian Residential School Crisis Line has been set up to provide support for former students and those affected. People can access emotional and crisis referral services by calling the 24-hour national crisis line: 1-866-925-4419.

Mental health counselling and crisis support is also available 24 hours a day, seven days a week through the Hope for Wellness hotline at 1-855-242-3310 or by online chat at www.hopeforwellness.ca.

Written by Sheena Goodyear with files from CBC News. Interview produced by Arman Aghbali. Q&A has been edited for length and clarity.