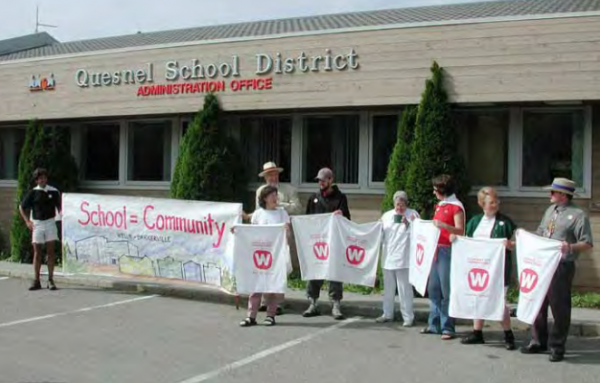 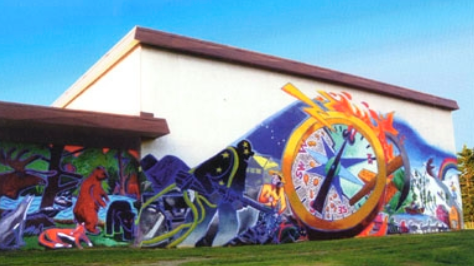 While many rural communities in BC have fought for their schools over the years, it’s doubtful any community has fought more fiercely than the citizens of the tiny town of Wells (population around 220), located in the Cariboo Mountains, 80 kilometres east of Quesnel, 8 km from historical Barkerville.

Wells, named after a hard rock miner, Fred Wells, was once a big as Prince George. Before mining waned just before World War II, the town of 4,000 boasted big city amenities, including both an elementary and a high school. As the population dwindled over the following years, so too did the town’s services and facilities. The hospital closed. The high school was shuttered. An elementary school program remained, in a building built to accommodate far more students.

Eventually, School District 28, based in Quesnel, decided enough was enough. They argued the need to provide a relative handful of students a local education didn’t justify the significant cost of operating and maintaining the Wells-Barkerville Elementary School, So the Quesnel board decided to close the school, a refrain all to familiar to rural residents across the province.

Local business leaders predicted jobs would be lost and economic development stagnate without a school to anchor families in the community. Parents feared their town would empty of its youngsters and their families, and vowed to not let that happen. They worried about six- and seven-year-olds spending more than two hours a day on a bus over a mountainous route that can be treacherous in winter.

“‘The children of Wells are not getting on that bus. They are going to go to school right here in our community this fall. That’s it. Period,’ says parent Carrie Johnston, who joined other moms and kids outside the locked doors of their school on September 3,” wrote Wylie Bysted in 2002.

“Parents, politicians, students, artists, and entrepreneurs in Wells remain united in their determination to save the centre of community and life-long learning. Besides being the only public school in town, Wells-Barkerville Elementary is also home to Island Mountain Arts, which offers adult courses in everything from quilting to choral singing and Celtic harp. Students come from across Canada and the United States and beyond, bringing tourist dollars and creative verve to the community.

“Visit the school, talk to the teacher, meet a few of the children, and it’s easy to see why people are so passionate about saving Wells-Barkerville Elementary. Teacher Linda Davis chose to spend the last three years of her 29-year career in the classroom in Wells. Last year she had a class of 15 students from Kindergarten to Grade 7. Fortunately for them, she arrived with a lifetime of experience—60 boxes of primary materials and 25 boxes of intermediate supplies.

“When the board voted to close their school, ‘it was pretty traumatic’ for the students, Davis said. ‘The children were very upset. It was almost a grieving situation. We had to do a lot of talking.” Now retired, Davis feels, “it would be a terrible disaster for the community if the school were to be closed. A community is not a community without young children and families. There’s no future.’

“The Wells Chamber of Commerce, the school’s Parent Advisory Council, and local politicians made eloquent presentations urging the school board to reverse its decision. They appealed to Victoria for help, but neither Education Minister Christy Clark, nor Cariboo North MLA Dr. John Wilson, would respond.

“By mid-summer, Chamber of Commerce vice-president Claire Kujundzic, a local artist and gallery owner, launched a hunger strike to back the community’s demand that the school stay open. ‘Facing this government, a lot of people feel powerless and hopeless,’ she said. ‘But you can do something! Starting the fast really made me feel empowered.’

“Claire stopped eating on July 16, maintained the fast for 12 days, until she began suffering chest pain. Her doctor advised her that she was sustaining heart damage, and urged her to end the hunger strike. She did, but others took it up including the 71-year-old mayor of Wells, Dave Hendrixson. He lost more than 10 kilos but gained a provincial profile as 33 days passed without food and still he couldn’t get any action out of the Liberals or the trustees.

“‘For the life of me, I can’t understand our school board,’ said Hendrixson. ‘I remember Gordon Campbell promising that when he got in, there wasn’t going to be any more downloading onto the municipalities. But if this isn’t downloading, what is? Now I can’t even get an appointment with Christy Clark. We got the same stock answer from both of them in form letters.’

“Claire and her husband, Bill Horne, hosted a constant stream of supporters and well-wishers throughout the summer, including B.C. Federation of Labour President Jim Sinclair and BCTF President Neil Worboys.

“Under the B.C. Liberal government’s new education funding formula, Wells-Barkerville Elementary School qualifies for something called the Small Communities Grant. This provincial grant of $100,000 per year is designed to assist rural and remote schools, acknowledging that they aren’t able to take advantage of the economies of scale available in more populous districts. It is particularly galling to the people of Wells that, although the board now is willing to negotiate some kind of cost-sharing agreement to keep the school open, they don’t acknowledge that the $100,000 is earmarked for the Wells school. Adding insult to injury, at the same time the board voted to close their school, they gave district administrators salary increases totalling $120,000.

“The Wells municipal council and the school’s PAC, also sent letters urgently requesting that Clark appoint a special advisor to help find a solution. However, in the Liberals’ New Era of flexibility and autonomy, the education minister insists that she bears no responsibility at all for ensuring that boards actually spend the grant on the small schools. Clark says the trustees made the decision to close the school and they—not her—will be held accountable for it in the November 16 municipal and school-board elections.

“As if their problems aren’t serious enough, community members are even more worried about rumours this year’s deep cuts are nothing compared to what’s coming next year. ‘They are just trying to delay the terrible choices in Quesnel until after the election,’ said PAC chair Will Lepine.

“By August 30, 2002, with only days before school was scheduled to open, Quesnel school trustees agreed to reopen Well-Barkerville Eelmentary — for a price. Chairwoman Louise Scott announced the school could be reopened if the community agreed to pay part of the cost. The board, she said, was willing to pay the same amount to educate students in Wells as it would to teach them at a Barlow Creek Elementary, 80 kilometres away. The community would have to make up the difference, estimated by the board as around $100,000 a year.

“Folks in Wells disagreed with the amount needed. Acting mayor Judy Campbell said $10,000 was a more realistic number. ‘I think we can deal with it through community fund raising,’ Campbell said. ‘But you might ask why we’d have to do that.'”

Weeks of tense negotiations followed. The 2002-2003 school year began, and Wells students had nowhere to go.

In 2003, the Government’s task force on rural education released Enhancing Rural Learning. Some of the issues highlighted in the report struck a familiar chord in Wells:

The Heart of the Community

The task force found that most rural communities have strong relationships with their schools and school boards. However, strained community-school board relationships are evident in some districts where remote communities feel that their boards are not responsive to local needs. These communities suggest alternate governance models ranging from charter schools to municipally-run schools to a provincial rural schools school board. School boards have expressed that consensus-building with the numerous town councils and mayors within their district can be challenging.

The task force received a number of submissions from communities and parents frustrated by the collective agreements between school boards and support staff that make sharing services extremely difficult or impossible without legislative intervention. The submissions contend that these types of restrictions make it difficult for communities to implement the creative solutions needed to adapt to declining enrolment and to retain a school in their community.

According to Bill Horne, who helped lead the charge to save the school:

This means Wells taxpayers are paying more to have a school than just the school tax portion of provincial taxes. The building eats up a significant portion of the District of Wells’ annual budget. The turnout of locals at school events is extremely high and I think that’s a pretty clear indicator of local support for the school.

According to current Wells CAO Andrew Young, The District’s annual operating and maintenance costs for the WBE school average at least $50,000; but that does not include major replacements/improvements such as the new boilers that were installed last year which cost $186,000, or the new roof that will need to be installed in 2018-19 (cost about $80-100,000). There are 17-18 children enrolled at the school presently.

Lindsay Read is working on the next phase, creating a destination high school. One curiosity, she notes, “is that we are trying to rename the school, as calling it a ‘school’ has inhibited our consideration for grant support!”

The education saga in Wells continues. If there is one concrete takeaway from this small community’s experience, it is that it is through the collective actions of a community, led by a few determined individuals, that local resources and values will be preserved. Change is inevitable, but Wells has shown that change can be shaped, to the benefit of even the smallest of our rural communities.