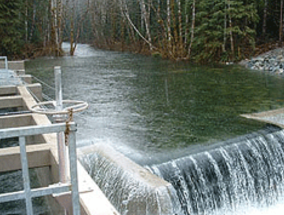 The Hupacasath First Nation pioneered the development of a First Nation micro-hydro operation with the China Creek Micro-Hydro Power Plant that has been in operation since 2006.

The China Creek Micro-Hydro Project began in 2001, when the Hupacasath First Nation focused on new forms of economic development. The primary goal of the project was to develop and build capacity the Nation could apply to future opportunities. The project was also intended to create wealth and contribute to the First Nation’s ability to generate economic growth and employment opportunities into the future. China Creek produces approximately 24 gigawatts of power annually. However, 2010 and 2011 were record years of production, with 28 gigawatts of power in 2010, and 30.6 gigawatts in 2011. The total cost of the project was approximately $14 million. To date, gross sales have averaged $1.6 million per annum. An Energy Purchase Agreement (EPA) with BC Hydro was entered into in 2006 with a twenty year term; the EPA will expire in 2026, the same time the project’s financing will be fully repaid. Project partners are Hupacasath First Nation (72.5%), Synex Energy (12.5%), Ucluelet First Nation (10%), and the City of Port Alberni (5%). The managing partner (General Partner) Upnit Power Corp., is responsible for day-to-day management of the operation. Though expected to function for 40 years, major structural issues have shown up in less than five years of operation. Upnit Power Corp. and the Hupacasath First Nation (HFN) are in the process of resolving these issues. Despite the issues with China Creek, this experience has shown Hupacasath First Nation the potential opportunities of micro-hydro development, and its potential contribution to economic development and diversification. The Hupacasath are pursuing other micro-hydro projects as a result.