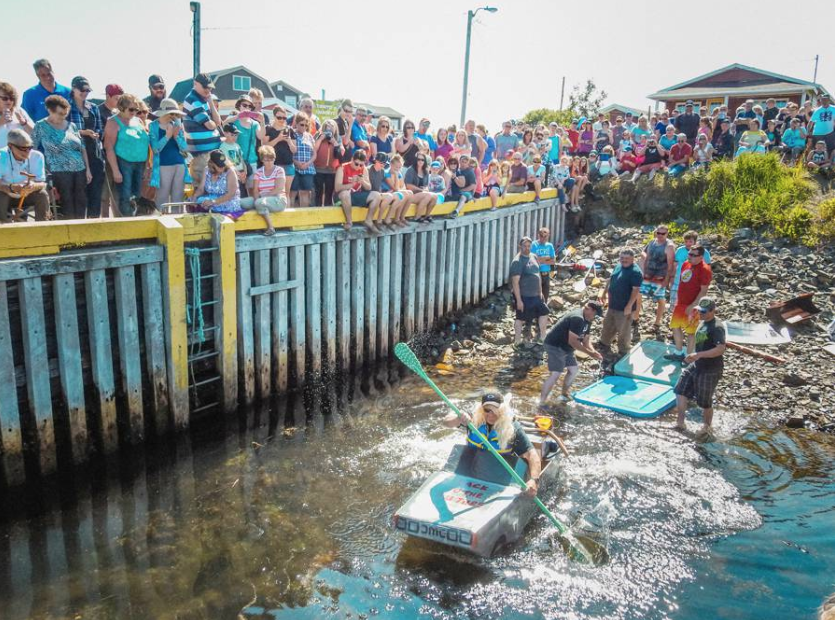 Luck and pluck. For some small towns in Atlantic Canada the path to survival has been just that: one of luck and pluck — or should that be the other way around?
After all, the adage “the harder I work, the luckier I get” has been proved time and time again by rural citizens.

In this article from the Chronicle Herald in Halifax, you’ll find numerous — and often novel — ways rural Atlantic Canadians have addressed the need to rejuvenate their communities. There are some great ideas and real inspiration for rural and remote British Columbians here!

Getting creative to maintain rural life

Luck and pluck. For some small towns in Atlantic Canada the path to survival has been one of luck and pluck;

or should that be the other way around?
After all, the adage “the harder I work the luckier I get” has been proved time and time again by rural citizens.
If you want an example, look to the north east coast of Newfoundland, to Trinity Bay, where the citizens

and decided if they didn’t all pull together, they would simply fall apart.

If not for hard work and imagination, Champney’s West might not have survived. “Only for volunteers, we would have nothing left,” says Wanda Pippy, one of the residents of this small community on the shore of Trinity Bay, in Newfoundland and Labrador.

“Our people are the biggest asset we’ve got.”

Pippy and Bev Freeman are two of the year-round population of about 50. In the summer, the population swells to triple digits as people return to their summer homes.

After the northern cod moratorium in 1992, rural coastal communities in this province took an economic hit.

But the people of this little town decided they wouldn’t go down without a fight.

They turned to their own creativity.

Drawing on their own talents for music and storytelling and following the mantra that “we’re all in this together”, what started as a very small local event, to lift the spirits of local citizens, is now nearly 30 years old. And it has morphed into a sold-out annual event, not only on the small stage in the local community centre but at the larger Garrick Theatre in nearby Bonavista.

Among those who pitched in to help, and is still helping, is 80-year-old Austin Hookey, one of the oldest residents in the community.

Like so many of the others, he’s talented, handy with fiddle and guitar.

Born and raised here he left for a time to work on the boats in the Great Lakes and he lived in St. John’s for a spell, but always ended up returning to the place when he was born and raised; the place he calls home.

“I never wanted to stay away. Never. I was only too glad to get back,” he says.

He can remember a time when the main livelihood for families here was from fishing.

Today, there are just three harvesters who have their boats anchored in the small harbour.

“There was a lot of fishermen before the moratorium,” said Hookey. “After that, people sold off their gear,

a lot of them. It was rough times.”

Thankfully they held on to their humour, and their imagination.

“We don’t hold nothing back here,” Hookey laughs. “People got to know that over the years and they

don’t know what could happen next!”

As the success of the annual variety concert began to grow, imagination kicked in again, and the

This annual summertime event has been pulling people towards this place for years now.

The money raised from these events has been pooled back into the community; helping them develop other

things to entice people to stop in for a while.

An aquarium and café, and the Fox Island Walking Trail, are just two of the latest attractions.

And people are not just visiting; they’re stopping to stay.

New siding and windows are being installed on older homes and new homes have been built on high points of land facing the sea.

People are choosing to live here; some year-round, others just for the summer.

While this tiny town in Trinity Bight has not seen a significant population growth, they seem to be holding steady as they find ways to grow.

Things like the aquarium — acquired with fundraising and funding — are helping, providing some seasonal work for local people and a reason for travellers to make the right turn past Port Rexton to see something different.

In the summer, say Pippy and Freeman, the aquarium gets as busy as “a Wal-Mart on Sunday.”

Add to that the community museum “The Heritage House”, the popular Fox Island hiking trail for hikers, and the archaeological site at Fox Island, fortified during the Queen Anne War in the 18th century, and Champney’s West is becoming a point of interest in tourism brochures.

“That’s a lot to be proud of,” says Freeman.

“It’s a wonderful place to live.”

Throughout Atlantic Canada there are stories of communities that, despite significant challenges, are beating the odds economically and socially.

The Fogo Island Inn, the brainchild of Fogo Islander and millionaire Zita Cobb and the Shorefast Foundation, stands out for its proof of the adage “if you build it, they will come.”

While not every community is blessed to have a millionaire with a vision, she says, the ideas of Shorefast can be applied, even on a smaller scale, in other communities.

The key is a mindset of positivity.

They say the right stories can reframe challenges as opportunities, shift mindsets from scarcity to abundance, and remind us how people have overcome challenges in the past.

“Compelling stories change behaviours and motivate people to take risks and do the hard work of building something new.”

The taste of success

On the tip of the Bonavista Peninsula, NL, the small town of Elliston (pop 308) was once a community that others passed by.

Following the closure of the northern cod fishery in 1992, residents thought hard about survival.

With a dwindling tax base, the town made headlines when it was unable to afford to keep street lights on — leaving it, literally and figuratively — in darkness.

Marilyn Coles-Hayley, chair of the Tourism Elliston committee, says the population dropped from over 500 to just over 300.

They knew they had to do something.

They looked to their history and culture; specifically, the more than 100 local root cellars that had been used over the centuries to store crops over the winter.

With clever marketing, the town soon became known as “The Root Cellar Capital of the World.”

Playing on the theme of food, the community began hosting an annual food festival — Roots, Rants and Roars — celebrating cuisine, music and the great outdoors.

Chefs from across Canada have been headliners at this annual event each fall, which draws foodies from around the province and beyond.

A tragic past — the Newfoundland Sealing Disaster of 1914 — also became a plank in the town’s revival. An old school house morphed into a provincial interpretation centre — Home From The Sea — telling the story of the disaster and the men, many from Elliston, who lost their lives.

Now, says Coles-Hayley, the town that most people passed by welcomes 35,000 to 40,000 tourists every summer. New businesses have set up here.

The street lights are back on. The population is stable and summer residents add to the mix.

“It wasn’t only to make it somewhere great for people to come, we wanted to be a place where people would enjoy living.”

Celebrating the arts in Oxford through new poetry festival

Oxford, N.S., is known for its blueberries.

The self-proclaimed Wild Blueberry Capital of Canada ships millions of pounds of blueberries annually to markets to domestic and international markets. Oxford Frozen Foods Inc. is the main employer in this small town (population 1,120).

But the leaders and citizens of this small rural town believe it’s important to diversify, to make sure there are plenty of reasons for people to want to live here.

A few years ago Ruthie Patriquin, the town’s development officer, asked citizens to come up with initiatives to breathe new life into the town. Eleanor Crowley and a handful of others thought way outside the box.

“In the course of conversation, Ruthie mentioned that April is poetry month, and I thought ‘that’s something that could work in Oxford, a poetry festival,’” Crowley said. “Mary Ellen Stevenson and myself started working together on it and before we knew it we were already through our first festival.”

The first event last year drew a handful of people. The second festival, this past April, drew over 100 — some of them from beyond Oxford and the surrounding Cumberland County.

“I’m surprised with the momentum it picked up almost instantly,” Crowley said. “At first I thought we’ll do it and see what kind of interest there is. From there, it was how can we make changes to get more people out to Oxford.”

“People are talking more about the festival and are surprised at the fact we are holding a poetry festival in a small town like Oxford. We’re sort of becoming a cultural phenomenon.”

Community heeded the call for All Hands on Deck

No one knew what to expect when a town hall meeting was called in 2013, but it had been difficult years in Yarmouth, N.S.

After ferry service ended years earlier, tourism dried up. Motels and a hotel closed, as did other businesses. The mood was glum.

But 500 people came to that All Hands on Deck meeting. From there things took off.

Attitudes changed. Community engagement grew. It went back to this: This is your community. What are you willing to put in to get it to where it needs to be?  The intent was to get out of the mindset that someone else is always going to fix things.

A façade program has seen businesses invest more than $650,000 in their properties beyond available grants. Hotels and motels have been renovated. A hotel is reopening. A new one will be constructed.

People still talk about All Hands on Deck.

“To this day, All Hands on Deck carries its legacy of hope, reminds us of the depth of our resilience and celebrates just how much we can accomplish when we pull together,” Mayor Pam Mood says. “It played a pivotal role in turning our community around.”

The population of the three Maritime provinces is currently growing at its fastest pace in decades, while Newfoundland and Labrador’s population has resumed its decline.

This follows three decades of steady decline in population growth rates in the Maritimes and seven years of population gains in Newfoundland and Labrador.

New Brunswick trails Nova Scotia with an annual rate of 0.5 per cent, but this is still the highest rates for New Brunswick since the early 1990s.

Newfoundland and Labrador saw a decrease of 0.2 per cent per year.

With an aging population, the number of deaths now exceeds births across the region, except in PEI.

Atlantic Canada continues to age faster than the rest of Canada; more than 20 per cent aged 65 years and older, there are now more Atlantic seniors than children and teenagers.

The total number of babies and pre-schoolers in the Atlantic region shrunk by 18 per cent over the last two decades; the number of school-age children (5-19 years) declined by 24 per cent; and the number of potential students in post-secondary education (20-24 years) fell by 12 per cent.

Five principles for community development — PLACE — emerged from a seven-year research project on Fogo Island, NL, by a Memorial University-based team, in collaboration with Shorefast Foundation of Fogo Island, NL.

46.4  per cent of the citizens of Newfoundland and Labrador contribute, on average, 151 volunteer hours annually.

50.4 per cent of the citizens of Prince Edward Island contribute an average of 179 volunteer hours annually.

50.9 per cent of the citizens of Nova Scotia contribute 181 volunteer hours annually.

40.6 per cent of the citizens of New Brunswick contribute 180 volunteer hours annually.