B.C.Premier John Horgan announced the provincial government is moving to help revive the provincial forest industry by requiring the use of engineered wood on the new St. Paul’s Hospital and the upgrade to the Royal B.C. Museum, in a speech at the Council of Forest Industries convention in Vancouver on April 5th, as covered in this post from CBC.

British Columbia is moving to help revive the provincial forest industry by requiring the use of engineered wood on the new St. Paul’s Hospital and the upgrade to the Royal B.C. Museum.

Premier John Horgan told the Council of Forest Industries convention in Vancouver Friday that he has also directed the use of engineered wood, where possible, for the $20 billion in public infrastructure being built, including schools and housing.

“It’s the province showing the way on transforming high-value products,” he said, adding that this initiative will focus specifically on ways to increase value-added production from a reduced wood fibre supply.

The industry is facing a number of challenges on different fronts such as reduced timber supply, record wildfire seasons, as well as lower prices for Western spruce, fir and pine timber, Horgan said.

“Fibre costs are going up. Lumber prices are going down. Timber supply is declining and they are all happening at the same time,” he said. “The challenges are not new but they are stark and they are significant.”

The plan, which will focus on increasing value-added production from a reduced wood supply, is the beginning of change that the forest industry needs, the premier said.

The province announced earlier this year that it was changing the building code to allow for construction of wood buildings up to 12 storeys using fire-resistant engineered wood. 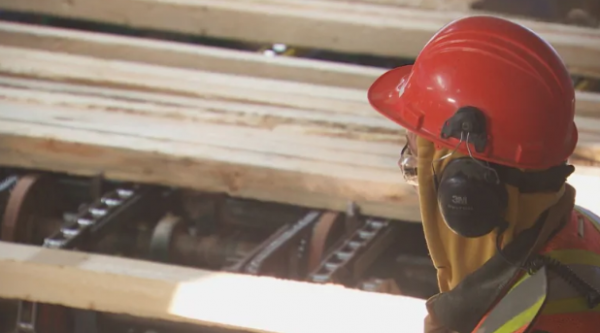 The government announced the Royal B.C. Museum modernization in Victoria in its throne speech and a business plan for the new $1.9-billion St. Paul’s Hospital in Vancouver was launched in February.

The province is also looking to creating opportunities for trade with China, Japan, Korea and other markets, Horgan said.

“People are building with mass wood products because it makes sense because it is cost-effective and it is an enormous opportunity,” he said.

Susan Yurkovich, president of the B.C. Council of Forest Industries, said the industry was “highly supportive” of the provincial initiative to use wood for the two new projects.

“We are a wood-producing province. We should have wood in our public structures,” she said.

The best way to help the forest industry is to grow demand, she said, adding that a strong domestic market could mitigate trade risks.

“When you grow demand for wood (domestically) obviously there is going to be a price advantage,” Yurkovich said, noting there is are no shipping fees or duties.

For more on BC forestry, see our Forestry page.